REPLACEMENT OF BRIDGE NO P-403

During the preliminary design phase, fabricators were contacted concerning availability of material, cost and delivery time of the superstructure beams, either precast prestressed concrete or structural steel. The delivery time for the prestressed concrete box beams was a third of the time as that for a steel superstructure and less costly, which were important factors in the overall project. The County selected the single span 72’ long prestressed concrete box beam bridge alternative on March 15, 2012, at which time the Design Team initiated preparation of Semi-Final Plans.

At the Semi-Final stage, the County began negotiating the cost of the project with the Contractor. The Contractor was given Notice-to-Proceed on December 3, 2012, with a completion time of 180 calendar days. Construction was substantially complete and the bridge opened to open to traffic at the end of June 2013, 15 months from the formal design notice-to-proceed.

The coordination between all parties, including the County, consultants, reviewing agencies, utility owners, contractor, and adjacent landowners, working together, accomplished the goal of putting the road back in service as quickly as possible. The Project Team collaborated on unique strategies and solutions in order to deliver an outstanding project on an accelerated schedule to address the concerns of the local community.

As a result, the Baden Naylor Road bridge project was awarded the County Engineers Association of Maryland (CEAM) and MdQI’s 2014 Project of the Year. 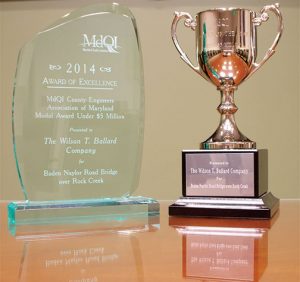